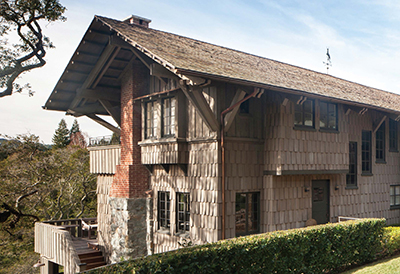 RENOWNED ARCHITECT BERNARD MAYBECK’S best-known design is the Palace of Fine Arts, built for the 1915 Panama-Pacific Exposition in San Francisco. Millions of visitors have strolled through its elegant colonnades and stood beneath its magnificent rotunda. But few of these visitors, including Bay Area residents, know that Maybeck also designed several grand residences, as well as an arts center, just across the Golden Gate in Marin County. Between 1904 and 1908, Maybeck designed three substantial residences in San Rafael, San Anselmo and Ross, as well as the Marin Outdoor Art Club in Mill Valley. These buildings vividly affirm Maybeck’s unique ability to achieve a delicate and pleasing balance between historicism and modernity, which made him one of the most influential American architects of the 20th century.

SECLUDED ON A ROSS hilltop, the chalet-style J.H. Hopps House was designed by Maybeck and partner Mark White in 1905 for a lumber baron. Nicknamed “Grayoaks,” this two-story home is nestled into a heavily wooded upslope lot on the appropriately named Winding Way above Canyon Road.

The Hopps House, one of the first homes built in this part of Ross, still enjoys unspoiled views of the surrounding verdant hills with their old-growth coast live oak and Douglas fir, and from the original eastern second-story deck you can still see both Mount Tamalpais and Bald Mountain. The original house had eight rooms, with three bedrooms and two baths. In 1925 Maybeck designed an addition on the southeast end, with a master bedroom suite and another small bedroom and bath. Unlike the shingled-exterior original house, this wing has stucco-over-concrete walls. The wide overhanging eaves, projecting brackets, and exposed beam ends on both wings are classic Alpine chalet features, which Maybeck included in much early residential work.

The Dutch double entrance doors of the original wing and the wood-latticed windows and capped chimneys in both wings are also typical Maybeck touches. Features like large plate-glass windows, a wide deck and concrete foundations were ahead of their time. The living room retains its original high-peaked ceiling with boxed beams made of Douglas fir, redwood walls with board-and-batten paneling, and large brick-lined fireplace with fieldstone corners and a redwood mantel. The master bedroom has a grand Gothic-arched fireplace made of travertine marble and lined with herringbone brick; redwood board-and-batten paneled walls; and a high peaked ceiling with open cross-strut beaming.

Current Hopps House owner Douglas Abrams bought the home in 2009. He’d lived nearby and admired the place for years before buying it from its third owners’ estate.

“It was in terrible shape when I bought it,” he recalls. He spent two and- a-half years on restoration, hiring architect Charles Theobald and historic architecture consultant Nancy Goldenberg to bring back the home’s rustic elegance; they also worked with him on an addition compatible with the original building, adding a large kitchen/dining room, two bedrooms and two baths on the eastern end.

Abrams is raising three children here and is glad he purchased the historic home. “While I was restoring this house, I learned all about Maybeck’s design philosophy, which became the inspiration for the addition. That process and raising a family in this wonderful house have given me great satisfaction.”

DOWN THE ROAD, Maybeck’s first house created for successful dentist J.B. Tufts is in San Anselmo, on a woodsy lot atop a forested hillside parcel at 14 Entrata Road. Designed in 1905, the Tufts House No. 1 is a brown-shingled 2.5-story residence with all the classic features of Maybeck’s revolutionary design philosophy known today as the “First Bay Tradition.”

Developed at the beginning of his career in the 1890s, this school of design followed four basic principles: combining historic motifs and details with modern materials and construction methods; employing undisguised natural materials, from the local environment; integrating buildings with their natural settings, through use of local materials and the siting of the buildings themselves; and tailoring each building to a client’s particular needs so it stands as a unique work of art. Today this philosophy is in vogue again, usually referred to as “green design.” In Maybeck’s time it was often called “building with nature.”

When the Tufts House No. 1 was built, large parts of Marin were undeveloped open land, covered in trees and traversed by freeflowing creeks. Maybeck designed the home in a Swiss chalet–like style, one of his favorite genres, reflecting his family’s Old World roots. The wide overhanging eaves, projecting balconies, exposed roof beams and wood-latticed casement windows are all features that can be found in old wooden houses in the foothills of the Swiss Alps.

When this house was built, it had sweeping views of Mount Tamalpias and the surrounding Coastal Range. Maybeck sited the home to take full advantage of those views from every room on the top floor, and one can still see the majestic form of Mount Tamalpais from there. A low-peaked main gable runs east and west above the spacious living room on the top level.

At the main entrance, on the south side, the heavy oak front door is recessed beneath an enclosed sunroom that was once an open porch. Entering, one stands in a small entry hall with dark redwood paneling and boxed-beam ceilings. This level has three bedrooms, two of them remodeled in the 1960s but still having their rustic ambience. A wide balcony extends off the western master bedroom, and the massive brick chimney has a Maybeck signature raised cap.

An elegant redwood staircase, with a landing halfway up, leads to the open, light-filled rooms on the top floor. Maybeck often used this contrast between small entryways and spacious upper-level main rooms for dramatic effect.

The living room is the dominant feature of the Tufts House No. 1. Stately and grand, it has a long rectangular shape, enhancing its expansive feeling. The low-peaked ceiling is lined with open beams that rise to meet a larger ridge beam. Every fifth beam is anchored at the bottom with paired beveled brackets whose dark-brown stain contrasts with the white stucco ceiling, as in a 15th-century hall in England.

Maybeck set an impressive fireplace into the center of the south wall, with concrete corbels beneath a large overmantel that shows his skill in using historic motifs: three inset panels have Gothic tracery patterns, still with their original gold paint (the same detail appears on the staircase landing). All the windows along the living room walls are paired casements, allowing an abundance of natural light. For extra lighting at night Maybeck installed two art nouveau–patterned wooden light fixtures into the upper ceiling, one on each side of the fireplace — a very early use of indirect lighting, which Maybeck (along with Frank Lloyd Wright) was among the first American architects to adopt. The two-story wing off the rear of the house, added in the 1960s, includes materials and features carefully chosen to match those of the original house.

IN THE HILLS ABOVE downtown San Rafael, a few blocks north of Fourth Street at 43 Culloden Park Road, stands a marvelous Tudor Revival manor house Maybeck designed in 1908 as the second in a series of three homes for J.B. Tufts.

The Tufts House No. 2 retains all of its original design features, although a later owner added a wing with a study and sunroom off the north end. This home has the appearance of a 16th-century English country estate, surrounded by lush, mature landscaping on a spacious lot. The house is sited well back from the street at the bottom of a gentle downslope, with a meandering brook that runs freely through the property.

The first impression Tufts House visitors have is that they’ve wandered onto the grounds of a country manor in the English Lake District. The high-peaked main gable rises two-and-ahalf stories, sloping more gradually toward the front of the house. The south side is sheathed in brown shingles, while the front is half-timbered, a combination often found in Tudor country houses. A large central pavilion is set into the second story, with a high-peaked gable that intersects the slope of the roofline. This pavilion, also half-timbered, forms a deep overhang that projects out over the front entrance, supported by heavy beams that end in carved dragons’ heads (a favorite Maybeck motif). The roof is covered in hand-cut gray slate tiles. The exterior’s overall effect is one of authentic late-medieval craftsmanship.

The spacious living room of the Tufts House No. 2 is directly behind a Dutch-style double front door. Boxed beams run east to west across the ceiling, adding to the authentic Tudor feel. The grand fireplace along the west wall is especially interesting: Maybeck employed his usual baronial scale here, also using textured concrete to look like carved stone on the massive overmantel and placing volutes under each end.

Custom-made Arts and Crafts tiles with folk animal patterns in warm earth tones form a picturesque frieze below the mantel. The dining room, adjacent to the living room at the northeast corner of the house, retains its original board-and-batten ceiling paneling. Large, square-latticed casement windows provide views of the backyard brook and the many mature trees beyond.

IN THE WOODSY country village of Mill Valley in 1902, some leading citizens founded the Marin Outdoor Art Club. Its aim was similar to that of Berkeley’s Hillside Club, of which Bernard Maybeck was a founding member: to preserve the natural beauty of the local environment.

In 1904, members asked Maybeck to design a clubhouse, which stands intact at 1 Blithedale Avenue. The club still serves its original purpose, also hosting public events like the annual Garden Tour and renting venue space for weddings and other gatherings.

The Outdoor Art Club is a fairly modest building, but its exterior is striking. It sits at the back of a wooded fenced lot, with a garden and planter boxes along one side. The walls are mainly composed of rows of French doors separated by narrow bands of wood sheathed in redwood shakes.

The steeply gabled roof is flanged outward above the walls to admit the maximum amount of light into the main room, or great hall. An unusual feature of the exterior is Maybeck’s ingenious system of roof supports. He extended the crossbeams supporting the grand-scale king posts in the great hall’s ceiling through the outer walls about three feet, where they meet upright wooden posts that pierce the eaves. As a result, the hall is an open, free-flowing space uncluttered by wooden columns intruding into the floor area. These extended roof beams are similar in purpose and appearance to the flying buttresses of a Gothic cathedral.

The great hall itself has a cathedral-peaked roof with massive open beams. The king posts have carved pendants at the bottom, with carved dragon heads at the end of short cross-tie beams. The French doors along the walls flood the hall with natural light, connecting indoors with out; at the north end of the room, a large fieldstone fireplace sits behind a raised platform used by lecturers and performers at club events.

This building has a timeless quality, like that of all great art. Maybeck’s Marin masterpieces are eloquent testimony to the fine craftsmanship and environmental sensitivity that were his hallmark.

LEARN MORE Mark Anthony Wilson, a Berkeley architectural historian, has been writing and teaching about American architecture for more than 35 years. His 2011 book Bernard Maybeck: Architect of Elegance (Gibbs Smith, $60, 240 pages) takes an in-depth look at the architect’s work.