DIPSEA IS ARGUABLY the county’s most well-known verbal mash-up. When spoken, these two monosyllabic words (dip and sea) squish together and roll so easily off the tongue. But navigating the seven-plus miles of this trail, which weaves its way from downtown Mill Valley to the town of Stinson Beach, is not so easy. The trail starts with a thigh-burning push up 670-ish stairs, divided by three flights passing through tree house–like homes intermixed with a few gargoyles set up to protect those who pass. It also skirts and/or crosses Panoramic Highway a few times, passes through a world-famous redwood grove and crisscrosses Deer Park fire road as well as a few streams. Throughout the years, runners of the famed Dipsea Race have given portions of the trail names like Dynamite, as in exploding muscles; Cardiac, let’s hope it doesn’t happen here; and Insult, meaning come on, I thought we were done with the uphills. It takes most runners between an hour or two to complete, and hikes can stretch the journey to three hours.

The history of the trail and how it was named is also a sometimes winding path. According to the Dipsea Race Foundation, a group that governs the race and gives out scholarships to young runners, it all started in 1904 with members of the San Francisco Olympic Club. The adventurous group of men were on a mission to visit the new Dipsea Inn, which had opened on the sands of what is now known as Seadrift. The Dipsea name, by the way, was meant to encourage guests to take a dip in the sea. After a ferry ride, a landing in Sausalito, and a train ride to downtown Mill Valley, this group — also a competitive bunch — put a wager on who could make it over the hill and to the lobby of the hotel first. They had so much fun that the next year they invited others to join and made it an official race, now the oldest footrace in the country west of the Mississippi. A couple of big changes were made and by 1971 women were officially allowed to compete, and the path end point was changed to the parking lot of the state beach, skipping the last mile on the sand. In 1983, the race date was fixed as the second Sunday in June, and thus began a countywide Father’s Day tradition. There is no prize money, but the top 35 finishers win the coveted black T-shirt, granting not only entrance to the next year’s race but also hero status among members of the community.

1. The middle section of the Dipsea stairs climb out of Mill Valley off of Marion Avenue through the wooded hillside on the way to Windy Gap. Here hikers will see one of the many eclectic and handmade signs that mark the Dipsea as it winds its way up the hillside. 2. The trail undulates a bit as you descend into Muir Woods; here hikers cross a small ravine with the help of a wood walkway. 3. Below Windy Gap the trail crosses Muir Woods Road and a small creek. If you hike the trail in winter/spring you’ll be greeted by a variety of small waterfalls and streams. 4. Continuing through Muir Woods, the trail crosses Redwood Creek. During the summer you can cross here on a seasonal bridge, but during winter/spring you’ll have to detour to Deer Park Fire Road to avoid disturbing endangered coho salmon. 5. Trail sign climbing to Cardiac Hill from Muir Woods. Deer Park Fire Road and the Dipsea Trail crisscross several times but pretty much end up in the same place. 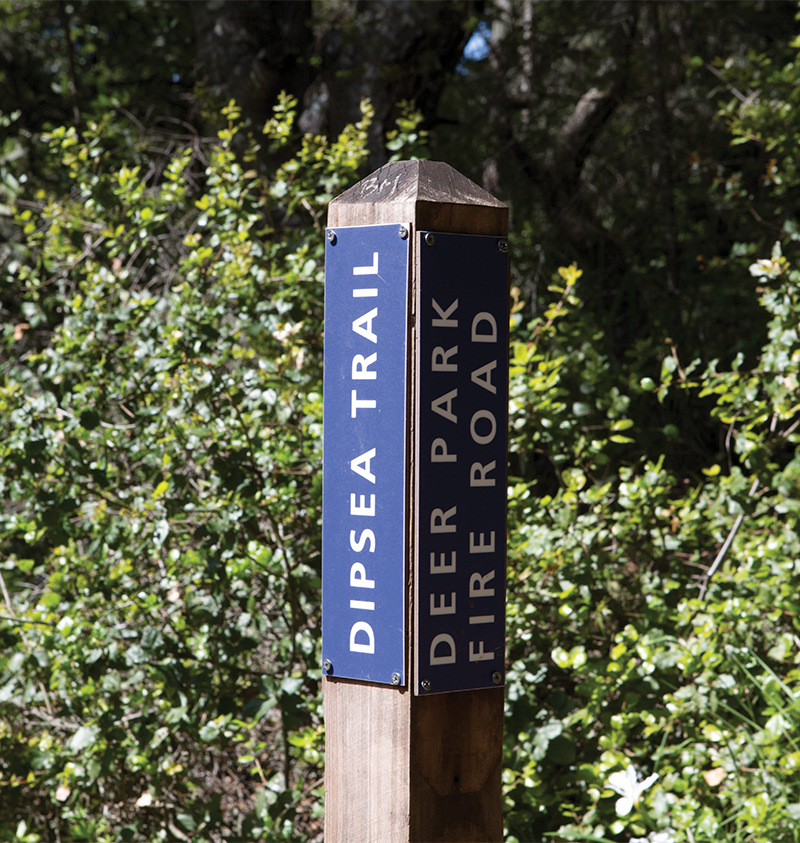 6. As you approach the top of Cardiac Hill the trail ascends quickly through towering Douglas firs and their stair-like root structures. 7. Looking south from the 1,360-foot-high point you can see San Francisco, Ocean Beach and Pacifica. This is the only place with potable water on the route; quench your thirst here. You can also get water at the Muir Woods Visitor Center, but it’s a bit off the trail. 8. At this point the trail descends quickly down another set of steps to Webb Creek and the crossroads of the Steep Ravine Trail. Winning race times can vary due to age handicaps. The oldest and youngest runners are given up to a 25-minute advantage, making it possible for virtually any age group to produce a race winner.

EDDA STICKLE The most recent Dipsea Hall of Famer is also a longtime volunteer race day director and a 25-year competitor.

REILLY JOHNSON At 8 years old, she was the youngest to win the Dipsea. And to add to the fun, she pulled it off on the 100th anniversary of the race. Girl Power!

RUSS KIERNAN This racer has won the event three times and earned 30 black shirts, more than any competitor.

Though the actual number of steps seems to vary, here are a few tidbits we know for certain.

Thirsty? You can thank Dispea Hall of Famer Eve Pell for spearheading a fundraising campaign to build a water fountain at the top of Cardiac, also the spot where she married her husband.

Who’s talking? For more than 30 years, historian, runner and all around Dipsea aficionado Barry Spitz has been announcing the names of the runners as they cross the finish line. If you’ve been there, you know his insight into the runners and times is irreplaceable. Spitz has written countless books on hiking, including the history of the Dipsea, available at most local bookstores.

How to get into the race? The race is capped at 1,500. How do you guarantee a spot? There are three ways. Finish in the top 750 in the previous year, mail in the application on time to get one of the 500 open spots or win one of the 100 entries in a silent auction (any money paid beyond the $60 entry fee goes toward maintaining the trail). And cross your fingers.

How fast? The quickest time for the race is credited to Ron Elijah, who crossed the finish line in 44:49 in 1974. However, due to course changes, it is unlikely this record will be broken anytime soon.