Perry’s on Magnolia: An Upper East Side Style Bar With Small Town Warmth Hours: Perry’s is open for Dinner seven days a week starting at 3pm, for Lunch Friday at 11am, Brunch Saturday at 11a.m. and Sunday at 10am.

Perry’s on Magnolia opened in Larkspur in 2015, in the historic Lark Creek Inn building originally built in 1888. Perry’s brought its hallmarks to Marin County: the classic American menu, a bustling bar, and the warmth and personality for which Perry’s has always been known. Nestled among the Redwood trees and along the bank of the Arroyo Holon Creek, Perry’s on Magnolia features a variety of dining spaces. Outdoor options include the heated Patio, the Redwood Grove, Upper Terrace and the front Garden. The interior features the Murphy Room set in the original building, the Garden Room adjacent to the lively bar area and the substantial bar itself.

Perry’s On Magnolia brought a Union Street institution to Larkspur, with a comfortable bar, beautiful patio, and food so good you’ll want to make an illegal left turn into their parking lot. The warmth, bustle, and general friendliness of Perry’s transports its diners into the New York saloons that inspired it.

We spoke with Perry Butler himself about what it took to bring an Upper East Side style bar and grill to Union Street, and from there to Larkspur.

Why did you want to open a Perry’s in Larkspur?

I have lived in Marin for almost 50 years, my kids were born here and we have lived in Larkspur for 22 years, so it is certainly “home”. Larkspur is a great small town community, a great restaurant town and there was a perfect opportunity to open here when the former Lark Creek Inn building became available. Finally, Southern Marin did not have a restaurant anything like Perry’s, so the opportunity was too good to pass up.

Where did you get the inspiration for your menu?

Perry’s on Union Street. That opened 50 years ago, and drew the inspiration for its menu from the Upper East Side bar and grill restaurants in New York City. That menu has evolved over time, has become very popular. It is what we do best.

What are some of the more popular menu items? Any specialties?

The one item we became most famous for, and which has become iconic is our hamburger. Beyond that, we are also known for a wide array of entree salads: cobb salad, chopped salad, and southwest chicken salad, but also fresh fish and steaks. At brunch, Eggs Benedict and Eggs Blackstone carry the day.

What sets Perry’s apart from other bars in the area?

Primarily our bartenders, who are a very special group of personable, knowledgeable, service-oriented people. This happens to be true of our entire staff in general, and is one of the key reasons for Perry’s longevity and success. In addition to the character of the bartenders, the quality of the drinks we serve, the variety of beers on tap and the wine by the glass list all contribute to the bar’s popularity.

The answer is many things. The location and the historic building’s setting, surrounded by redwoods is a great place to start. The Patio and the Grove provide the best outdoor dining anywhere. But none of these elements would matter if it were not for the basic Perry’s concept and the caliber of people who carry it forth day in and day out.

Why do you think Perry’s has become such an important part of the community?

Perry’s attracts a wide cross-section of the Larkspur community and the Southern Marin community in general, so our regular customer base is a broad one. Additionally, we participate in the community in charitable and other ways and believe strongly in giving back in appropriate ways. As mentioned above, the Butler family has lived in Larkspur for many years, so we have been part of the community personally for a long time. 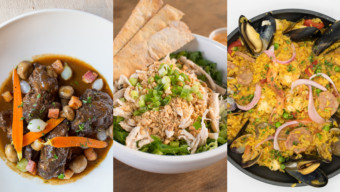