A Home Bathed in the Light of West Marin As Sir Francis Drake Boulevard winds its way west out of downtown Fairfax, the landscape seems to exhale. The road narrows, flanked by deep green trees and wide acreage dotted with farm animals. It’s a subtle but telling shift. Sensing the power of the landscape to transform their days, Lisa and Dan Mchugh purchased a plot of land here, just off Nicasio Valley Road in San Geronimo.

“You see that hill over there?” Lisa says, facing southeast. “That’s White Hill. It is the sigh-inducing point that divides Fairfax from Nicasio.”

The McHughs met in San Francisco and spent some 30 years in South Asia — Singapore and Bali, mostly — before returning to the Bay Area to live in San Rafael. Residents of Washington state, where they also have a residence, they sought a place to build their dream house and used the San Rafael location as a temporary base. “We knew we wanted to be in Marin,” Lisa says. “We were always heading out to Point Reyes and felt protective of the environment here.”

Lisa, a visual and interior designer, and Dan, CEO of Livingston International, a shipping and freight service provider, found a parcel of land in the French Ranch sub-division and sought an architect to collaborate with on designing a space and a building that would interact with the environment.

“I wanted the house to have a more dynamic relationship, that requires one to engage with the elements: light, tree frogs, birds and coyotes, constantly changing winds, and the unique fragrance and color of each season,” Lisa says. Wade Design Architects in San Anselmo landed the project. Principal Luke Wade knew it was the right fit for the firm, noting that the studio’s previous projects expressed a kind of rural quality that matched the property and the clients’ vision for it. The McHughs, still living in San Rafael, visited the site frequently, getting to know its unique character and rhythms. “We sat outside with folding chairs and wine for a year before we built anything,” Lisa says.

For this property, technically under Marin County jurisdiction and adjacent to county open space and the former San Geronimo Golf Course, Wade and his team needed to think specifically about the western exposure: the intense sun and prevailing wind that drives the fog relentlessly inland toward the bay. They installed a weather station to monitor what time of day the breeze kicked up. A steep hillside slope on the northern side of the property presented another challenge.

As the initial design took shape, Wade conceived of a pin-wheel shape, which not only is less boxy than conventional houses and more like a villa in Bali or Singapore, but would allow light to permeate each room from two sides. Bedrooms and bathrooms would be placed toward the steep hillside, allowing privacy. A courtyard on the eastern side of the home would serve as a shelter or retreat from both wind and heat; a pool on the western side would catch the warmth of the afternoon sun. “That decision let the living room become more pavilion-like, with sliding doors to connect it to the pool and make it a breezeway,” Wade says. The spaces would naturally unfold and “get out of the way of the natural connection between courtyard and pool, between east and west.” With the design decided, construction started and was completed two years later. Now, with that desired sense of outdoors coming in, that regular interaction with Marin’s greatest natural element — wind — is a reality for the McHughs. They say they especially appreciate that the main entranceway and courtyard make a connection between the home and the San Geronimo environment. “I close and open doors with the wind so I always have the outside in,” Lisa says. “It was so exciting to choose that, to make it happen.”

In the kitchen, Lisa used her art and design knowledge to work with Susan Lund at San Anselmo’s Spacial Design on cabinets and surfaces that are impervious to stains. Lisa built a dining table using scraps that remained from the building project, sanding and finishing it to match the cabinets. Personal designs infuse this home: Lisa’s own creations and finds as well as things from the couple’s years in Asia and Washington state. Cane chairs, sanded down and repainted, traveled with the couple and their two children for more than 30 years. A driftwood lamp is made with wood sourced from the San Juan Islands. In the guest bathroom is a section of orca vertebra found on a beach in Puget Sound; in the bar area is a door from a Tibetan monastery in Kathmandu. 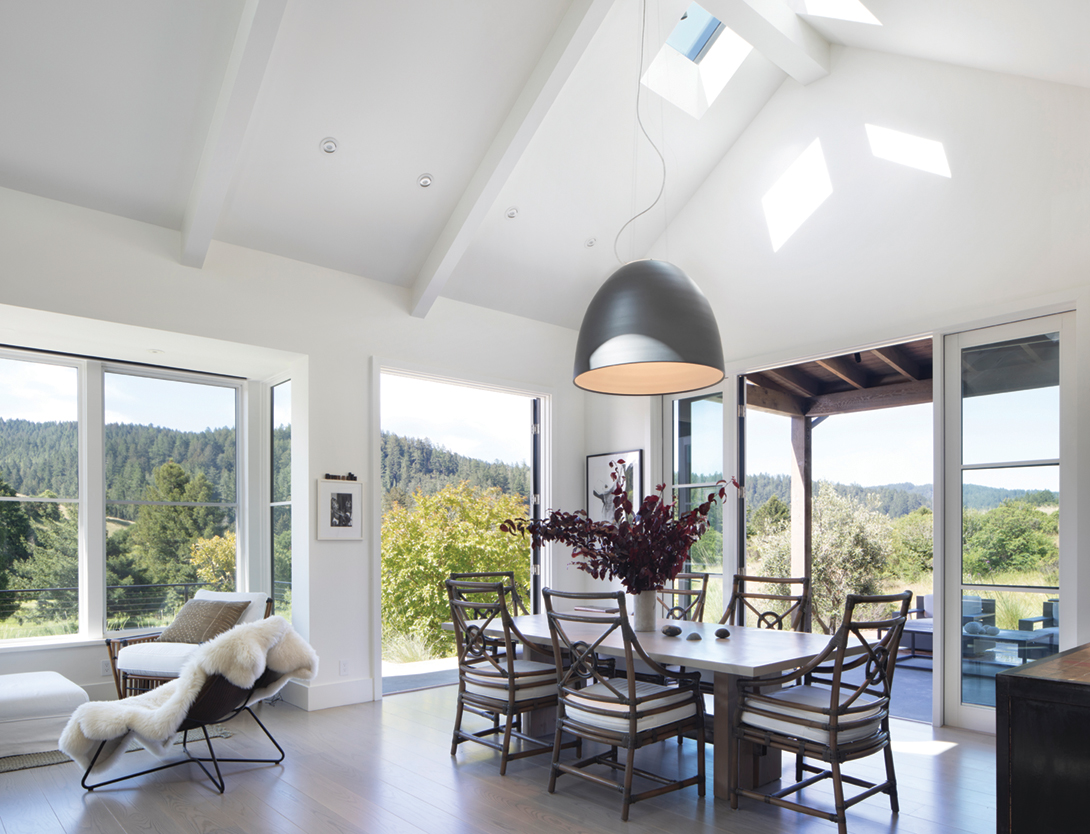 But it is perhaps the living room that commands the most attention. The ceiling soars 16 feet; the nine-foot sliding doors to the east and west bring in light, and above them clerestory windows open, so the couple can fine-tune the breeze. Above the fireplace, the central visual element of the room, a wall of darkened gray plaster reaches to the ceiling; light from all the windows nearby adds a dark warmth and “casts beautiful shadows,” Lisa says. Two white couches from Marin Sofa in San Rafael face each other for ease of conversation and a view outside. To the right of the fireplace, a doorway leads to the guest bedrooms and a Jack and Jill bathroom; through a doorway on the left is the master suite. Dan’s office is there, along with a gym that has a functional garage door opening to the natural land- scape. Behind the bedroom, through a door to a deck, a hot tub and sauna made of cedar occupy the abutting steep hill, which provides a wall of privacy. Small windows inside the sauna frame the hill to dramatic effect.

It is a home that balances the personal and the utilitarian with cozy nooks and plenty of space to be alone or together. “Every time we arrive home,” Lisa says, “we feel both a wonderful connection to place and deeply humbled by and grateful for the joy it brings.”