For Phil Lesh, 30 years with one of popular music’s most celebrated groups was just the beginning. After the Grateful Dead disbanded upon Jerry Garcia’s death in 1995, the bassist launched Phil Lesh & Friends, a group featuring revolving membership that he continues to perform with today. In 2009, he reunited with Dead guitarist Bob Weir in Furthur, a live act that has earned accolades of its own. Now 72, Lesh retains an intense passion for music. Following an ill-fated attempt to open a venue in Fairfax, he and wife Jill, who live in Ross, bought the former Seafood Peddler restaurant along San Rafael’s scenic canal in February and converted it within weeks into a warm, modern restaurant/venue called Terrapin Crossroads (Terrapin Station was the name of the ninth Grateful Dead studio album). The place was conceived as a home away from home, a community center, and a comfortable place for Phil to play — whether with big-name acts or with sons Grahame and Brian, both in their twenties — without having to hit the road. The venue’s debut in March came just two months after the reopening of the Sweetwater Music Hall in Mill Valley, an effort led in part by bandmate Weir. We sat down with Phil and Jill in Terrapin Crossroads’ upstairs lounge to discuss the new project. 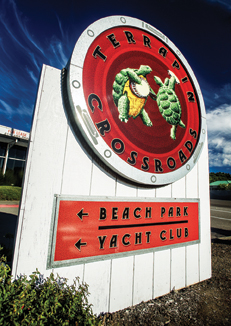 What’s your take on the success of the place so far? Phil Lesh: Well, it’s still a work in progress. We haven’t even begun to start bringing the variety of music that we want to bring in here. I’m very pleased with the response that we’ve been getting. People come up to me on the street and they’ll say things like, “Well, thank you for building that here,” or, “I haven’t come down yet, but I’ve got to because everybody’s talking about it.” So I think people really know that it’s here and are interested and are planning to come down. Jill Lesh: We’ve done 50 shows already, between the Grate Room and the bar. It’s been really fun. We’re getting a lot of parents coming with their teenage kids to the shows, which is really fun. It’s kind of been a family affair. P: That’s the vision that we had originally. We want it to be multigenerational. We want to involve everybody in the community and have them feel like this is a place for them to come hang out. And that’s working out pretty well, I think.

Will you have an opportunity to host upand- coming Marin-based artists? Have you been keeping an eye on the local scene? P: Yes, that’s definitely part of the program. We haven’t started to do that yet, because we’ve been trying to get established. But the scene seems to be thriving. Out in Fairfax, there’s all kinds of local musicians playing all the time. I’m constantly moving around, trolling for musicians. And word is getting out. J: Bobby [Weir] was talking about the Sweetwater and Terrapin Crossroads having a synergy, with different people coming in. We’ve actively discussed that.

It’s a pretty phenomenal coincidence that you both opened venues in the same year. J: They’ve been working on the Sweetwater for a long time. It was kind of a coincidence that it all happened at the same time. We’ve both been on similar paths. It’s kinda cool, though. We believe in synergy in the Grateful Dead world, so it’s a good thing. P: If we can get the three of these entities [including Weir’s nearby TRI Studios, featured in the July issue of Marin Magazine] working together, we’ll have quite a little scene here. I’m excited about that. And I’m excited about having young musicians come in and play. I want to have multigenerational bands. I’ve already started that with my sons, so musicians their age will come in and play with musicians my age.

Your idea of creating a clubhouse like this goes back pretty far, doesn’t it? P: Grateful Dead had a flash of trying to do that in the late ’60s. We were going to find a place and plug into it and beam it up to the rock-and-roll satellite and send it all over the world. That, of course, didn’t happen. We tried again in the ’80s; we were thinking about trying that approach at Rancho Nicasio, but that didn’t work out. But then, 30 years later, we have Bob doing the Sweetwater and this came up for us. So it’s obviously time for it to happen. How often do you anticipate performing at Terrapin Crossroads? P: I mean, It’s my sandbox. I can’t imagine anything that I could enjoy more than playing music down here. Maybe three shows a week instead of four. So far it has been absolutely great.

Sounds like you’re pretty thrilled that you’ve landed here after all those decades of dreaming about it. P: I’m ecstatic. Somebody the other night, after I’d just finished playing a bar show with both of my sons, came up and he asked, “Phil, have you ever been happier?” And I have to admit, I couldn’t say that I ever have. I mean, this is my favorite place. J: There’s a line in a Grateful Dead song that says, “See here how everything leads up to this day,” and it kind of has. P: There’s another one that says, “I will not forgive you if you will not take a chance.” And then there’s the one that says, “Inspiration moved me brightly.” Put all those together and this is what you get.

So the issues in Fairfax were ultimately for the better? J: We wouldn’t have done this if we hadn’t done Fairfax first. Because we would’ve been overwhelmed. Everybody was really nice in Fairfax, I mean really lovely. It wasn’t the right destination, but it was the right path. We had to go through there. You always hear the negative, but there were so many nice people in Fairfax. P: Yeah, we learned a lot. The majority of people were extremely supportive. Gary Graham from 19 Broadway took us around and we met all the other business owners. J: It was actually a really positive experience, for the most part. I mean, it’s nice we ended up here.

You changed the name from Terrapin Landing to Terrapin Crossroads. What does the new name mean to you? P: Crossroads is a meeting place, of minds, of ideas, of people. So the thought of crossroads really seemed to describe what we were looking to do. A crossroads is like a place where you continue a journey.