ON A RECENT trip to Chicago, I was excited to check off a wish list of attractions I wanted to explore. In the distant past I’d known Chicago for its stockyards (go Bulls!), first-rate entertainment (Mister Kelly’s, the House of Blues) and bombastic politicians (the nickname “Windy City” doesn’t refer just to Lake Michigan’s chilling gusts). It had been too long; I was eager to see what today’s Chicago is like. “Chicago is the greatest city in the world,” announced Brad, narrator of the 90-minute Shoreline Sightseeing architecture tour, which cruises the Chicago River. Several different boat tours leave regularly from the corner of Michigan Avenue and Upper Wacker Drive to showcase the city’s beautifully designed riverside structures, most of them built recently, although several date back to the 1920s and ’30s.

The 34-story high-rise at 333 North Michigan Avenue, erected in 1928 and completely renovated in 2015, “is an excellent example of the art deco style,” noted Brad; “the limestone-clad tower’s strong vertical lines enhance its slender height.” Another intriguing example is the Merchandise Mart, built in 1930 to warehouse Marshall Field and Company’s merchandise and, at four million square feet, for a while the largest building in the world. “Now it has to settle for having its very own ZIP code,” Brad said.

As for contemporary additions, much as I wanted to, it was impossible to miss the Trump International Tower and Hotel, designed by Skidmore, Owings & Merrill and completed in 2009. It is, surprise, the tour’s only building with its name front and center in big bold lettering. Soaring 1,389 feet in the air, it’s Chicago’s second tallest structure (the tallest, also visible on the tour, is 1,450-foot-high Willis Tower, formerly Sears Tower, designed by SOM back in 1973). In all, the tour covers more than 65 structures, most of them sleek, gleaming, handsome towers rising hundreds and hundreds of feet into Chicago’s skyline. My absolute favorite was an out-of-place four-unit condominium building named River Cottages, designed by Harry Weese to reflect his worldly travels. It’s a 30-year-old angular building, overgrown with blossoming pink geraniums and bordered by rusting pilings — yet each condo has its own deck with an unobstructed river and city view.

“OK,” Brad said when asked to explain why Chicago is the greatest city in the world, and with his fingers began ticking off reasons: “For the past half century, we’ve been one of the largest economies in the world; unlike other massive cities’, our economy is not only among the world’s strongest, it’s diversified between finance, tourism, education, telecommunications and technology, with not one of them employing more than 14 percent of the workforce.” Next he delivered convincing statistics on population diversity and income equality and, with two fingers to go, added, “Furthermore, every year, 55 million visitors, international and domestic, come to Chicago, and O’Hare is the second busiest airport in the world.” Then, catching a breath: “Plus, we have incredible culture, cuisine, entertainment and recreation.” He looked at me and solemnly asked, “Have you visited the Art Institute of Chicago?” 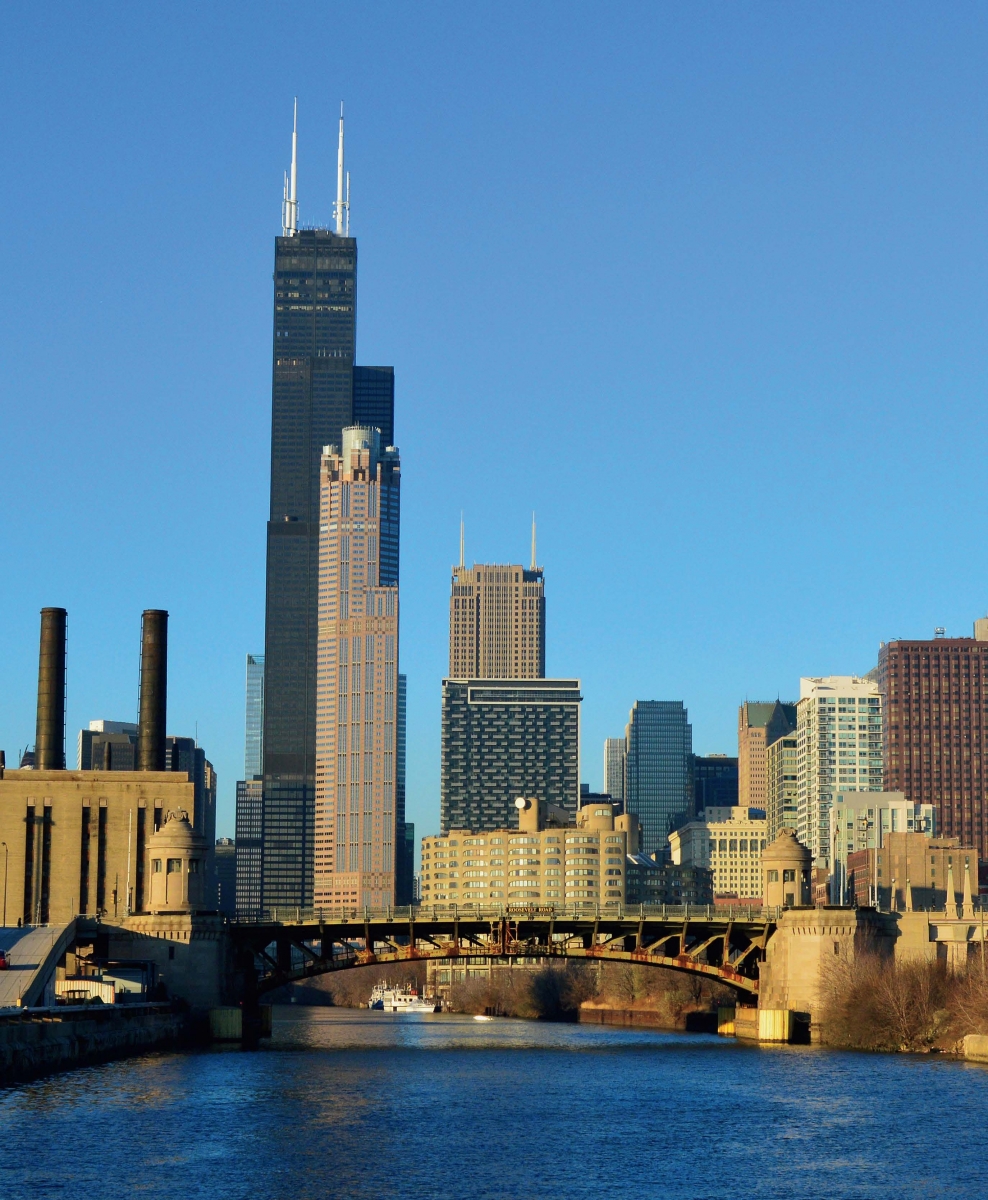 After the tour, that was my next stop, one of America’s oldest art museums (1879) and the second largest (one million square feet) in the U.S. It has outstanding permanent collections, from African art to 68 miniature rooms featuring different moments in history. I only had time for the Modern American Art, Contemporary and Impressionist collections. What stood out most were Edward Hopper’s “Nighthawks,” Roy Lichtenstein’s “Artist’s Studio,” and, among a slew of Renoirs, Matisses and Monets, Gustave Caillebotte’s 1877 masterpiece “Paris Street, Rainy Day.” When in Chicago, do not miss this centrally located, accessible museum.

The Museum of Science and Industry is another must. It occupies the former Palace of Fine Arts, built for the 1893 World’s Columbian Exposition and designed by Daniel Burnham (the architect depicted in Erik Larson’s 2003 historical thriller The Devil in the White City). It’s several miles from downtown, so I took the Metra train, an efficient and immaculate experience. Among the many varied exhibits: a 3,500-square-foot model railroad; Apollo 8’s command module; a life-size replica of a 1930s coal mine that I went down into, literally, coal dust and all; and, most memorably, U-505, a captured German U-boat containing a trove of Hitler’s submarine secrets that was towed across the Atlantic to Bermuda in the late stages of World War II. A wing of the museum was literally built around this vessel, which can be toured on board, and the complete story of its capture had me thinking (and Googling) for days. You can spend an entire day and just scratch the surface at this museum. In Chicago, not everything worth seeing is in a building. Like the eponymous song says, this is “that toddlin’ town” — a walker’s city. Over my three days I found Chicago’s streets and sidewalks mostly litter- and graffiti-free; the spring plantings inspirational; the automobile traffic minimal (thanks to excellent public transportation above, below and alongside me); and the people, almost without exception, friendly, helpful and noticeably proud of their hometown.

An outdoor attraction you’ll want to be sure to visit is Millennium Park, downtown between Michigan Avenue and Lake Michigan. Once there, I couldn’t pull myself away from “The Bean.” It’s a huge, reflective, silvery blob that resembles liquid mercury and acts as a people magnet. Folks can’t stop staring at their reflections in it and I couldn’t stop people watching — it’s the selfie capital of the universe.

One of Chicago’s most popular places for family entertainment is Navy Pier, which juts almost a mile out into Lake Michigan. Many of its activities are better suited to warmer weather, but I was able to take a couple of spins on the Centennial Wheel, a Ferris wheel that lifted me 200 feet into the sky, affording awesome city views. Visit Navy Pier in the summer, I was told, and you’ll catch Chicago at its most exuberant. As for Chicago at its most intense, on my last night I was fortunate to get to the Goodman Theater for Ibsen’s timely classic An Enemy of the People — and it still has me in its spell. In addition to performances that kept the audience glued to their seats (until the standing ovation), the 856-seat theater is one of the most comfortable I have ever visited. The Goodman stages musicals, operas and new plays as well, and performances there have won two Pulitzers and 22 Tony Awards. Besides theater and museums that are often open late, the city’s plentiful nightlife includes the hometown Joffrey Ballet, Chicago Symphony Orchestra, dozens of comedy and jazz clubs and myriad hip-hop and rapper acts.

And don’t forget the Cubs and the Bears; Barack and Michelle; steakhouses, deep-dish pizza and Chicago-style hot dogs; Oprah, Hillary and Robin Williams; Loyola Ramblers men’s basketball and Sister Jean; Saul Bellow, Ernest Hemingway, Roger Ebert and Frank Lloyd Wright and … Come to think of it, maybe Brad was right — Chicago just might be the greatest city in the world.

This article originally appeared in Marin Magazine’s print edition under the headline: “The High Life“.