Even before Covid-19 hit, a busy couple with three young children wanted a sanctuary within their weekend retreat. They live most of the week in San Francisco and also have a 5-acre vineyard property in the Napa Valley. However, with children and guests, the property’s five-bedroom, 5,000-square-foot house could feel hectic.

“The husband is a busy tech executive,” explains Juancarlos Fernandez, co-founder of Signum Architecture. “They called us to design a place on the property where they could retreat from family life to relax, or work.”

Fernandez and his business partner, Jarrod Denton, started Signum in 2011. They are known for creating buildings that connect with the environment, which is exactly what the homeowners wanted for this project.

The family didn’t want the building to shout, “look at me!” Instead they asked for the retreat to feel like part of the landscape. Also part of the project were Studio Collins Weir for interior design, M Studio Landscape Architecture for the grounds and outdoor spaces, and Westwind Construction for the build.

The family calls the resulting series of 5 interconnected buildings “the sanctuary.” The project was limited to 1,000-square feet of building space, but it feels larger because of the connected outdoor spaces.

Within the cedar fence that separates it from the surrounding vineyards are a steam room, a sauna, a spa tub, a plunge pool, a bathroom, a changing space, a massage room, a sitting area and a guest suite with a small kitchen and its own bathroom.

The space isn’t appropriate for unsupervised children, so the surrounding 5-foot fence keeps kids away from the water features.

“Instead of a long, boring building, we broke it into a series of shapes and connected everything with fully glazed breezeways,” Fernandez says. “If you look down on the sanctuary from above, it looks like the stacking stone sculptures people make on the beach.”

Fernandez adds that this idea of the retreat as a stone cairn really spoke to his team. Building a stone cairn simultaneously engages and relaxes the brain—an idea that fit perfectly with what the homeowners had in mind.

In designing the exterior, Fernandez didn’t look to the main house—a white, contemporary, barn-style home with shed roofs—for inspiration. Instead, he looked to the surrounding vineyards.

“We wanted to make the building low-profile, so it wouldn’t interfere with the views of the Napa hills from the main house,” he says. “We treated the exterior cedar to look like aged vines, so the building blends into the landscape.”

The team continued the exterior elements, like the cedar and the terrace’s concrete floors, into the interior, so the indoor and outdoor spaces would blend into each other.

Furthering that illusion are two glass and steel breezeways that offer unimpeded views of the sky and surroundings while providing protected passage between buildings. The massage suite opens into a courtyard where all the water elements of the retreat—a plunge pool, a black granite spa tub and a fountain—are located, as well as a terrace for sitting and relaxing.

A Fountain Of Serenity

“The element of serenity was important to the design,” Fernandez says. “So, the fountain is a beautiful visual element, but it’s also a sound element.”

He notes that, although there’s no traffic noise, workers are busy in the surrounding vineyards year-round, so the fence and fountain help shield the space from agricultural noise. The retreat also has cleverly hidden mechanicals, so the pumps and heaters are never seen nor heard.

Continuing away from the main house, on the other side of the sanctuary, the team built a tennis court for the family. It’s also cleverly hidden from view, with an earth buffer that creates a bio retention zone planted with grasses to prevent erosion from runoff.

“There’s no artificial lighting and when you’re near it, you can’t see the chain link fence,” Fernandez says. “It’s just a green forest around it.” The retention scheme worked perfectly during last December’s heavy storms: the water collected in the bio swell and then slowly released into the property’s nearby creek.

The couple started using their retreat in the summer of 2021 for massages and meditation, but the collection of structures also functions well as a workspace or for an in-person meeting.

“The wife hosted her book group here and the husband sometimes comes with his laptop to work in quiet,” Fernandez says. “It’s a warm environment with the amenities of a spa, but if you’re sitting with a computer, the space works for that too.”

Laura Hine is a design and style writer based in Brooklyn. She’s a former editor-in-chief of Better, as well as the Modern Luxury publications Interiors Chicago and NS. 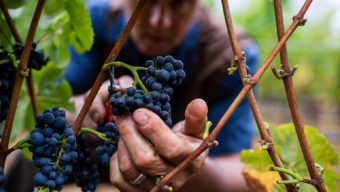