Rosie the Riveter Trust is celebrating the history of the World War II home front at a Sept. 17 gala, Rosie’s Big Bash. The fundraiser will highlight programs supported by the trust in collaboration with Rosie the Riveter/WWII Home Front National Historical Park: Every Kid Outdoors, Rosie’s Service Corps, and a documentary (currently in post-production) about the park’s Rosie Ambassadors.

The Ambassadors were young women, just out of high school, who worked at the Kaiser Shipyards. Today, they volunteer as docents for the national park and tell their lively stories to students and visitors from around the world. Now in their late 90s, these women are living legends and the gala will pay tribute to their service.

“We have a gem of a national park located right here in Richmond, California, where visitors can come learn about the home front and hear stories told in first person by women who worked in the Kaiser Shipyards, as well as those who spent years in the internment camps during the war,” says Sarah Pritchard, executive director of Rosie the Riveter Trust. “The history of the home front and societal changes that transpired during World War II are important lessons to preserve and share, and it is our goal to inspire a new generation of trailblazers to carry forth the ‘We Can Do It!’ spirit of coming together for the common good.”

The gala, beginning at 5 p.m., will be held at the historic Craneway Pavilion, 1414 Harbour Way South, next to the park’s visitor center on the Richmond waterfront. The Craneway, which boasts a fabulous view of San Francisco, is also rich in history; it was formerly the Ford Assembly Plant where some 49,000 tanks and jeeps were assembled during the home front era.

The event begins with a cocktail hour and entertainment by Jeovani Abenoja, followed by dinner, a tribute to the Rosie Ambassadors, a presentation of the Trust’s inaugural Rosie the Riveter Certification Awards to California Contractors, and swing dancing with the Klipptones. Live and silent auction items will be available for bidding.

While individual tickets to the event quickly sold out, a waiting list remains active, with a possibility of more tickets to come. Two sets of tickets are readily available, however — one to view the event via livestream, and another for the dance party portion, which starts at 8 p.m.

Rosie the Riveter Trust is the official partner of the Rosie the Riveter/WWII Home Front National Historical Park, founded in 2000 in Richmond, California. The park chronicles the explosive growth of wartime industry, the innovations fostered by visionaries like Henry J. Kaiser, and the extraordinary history of people who were challenged as never before and came together to overcome wartime odds with the “We Can Do It!” spirit.

For more information, or to purchase tickets, visit the trust’s website: rosietheriveter.org. 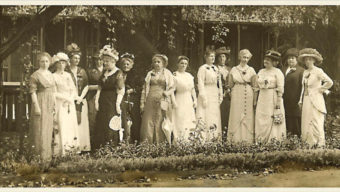