When Craig Flax, a longtime tennis coach at Redwood High School, discovered his teenage daughter potentially had an eating disorder, he was completely floored. She had always been a light and picky eater, and getting her to finish dinner could often be a chore, but they had chalked up her lack of interest in food to nothing more than a small appetite.

Then, in her freshman year, his daughter was told she was “too skinny” to join the Redwood soccer team, despite her pronounced skill level in the sport. While the decision was frustrating, the rejection prompted Flax and his wife to take a closer look at their daughter’s situation, which led to a surprising diagnosis: She had an eating disorder called avoidant restrictive food intake disorder (ARFID). Unlike anorexia, ARFID isn’t associated with body image, but it does pose a serious threat to proper nutrition and development due to a persistent lack of hunger and the anxiety that accompanies it. Flax considers himself lucky to have discovered his daughter’s eating disorder and get her the help she needed before the situation led to more serious physical and mental health consequences. Flax’s situation isn’t that uncommon, but not all parents are so fortunate to spot signs of distress in their children early on before they lead to a mental health crisis.

Alarmingly, mental health concerns are becoming increasingly common in our youth across the nation. Both the American Academy of Pediatrics and the Surgeon General issued statements in late 2021 declaring that the United States is experiencing a youth mental health crisis, signaling a wakeup call regarding mental health that is desperately needed.

The crisis is apparent here in Marin County, too, which has one the highest suicide rates in the entire state of California amongst young people. According to the Marin County Suicide Prevention Collaborative’s annual 2020–2021 report, while residents between the ages of 15 to 24 make up only 10% of Marin’s population, that subset represents 44% of the county’s emergency room visits, 36% of hospitalizations and 10% of deaths. In addition, the report states, teenage girls disproportionately engage in nonfatal self-harm and suicide attempts that result in ER visits or hospitalizations while boys — though they attempt less frequently — die at higher rates than girls.

Of course, depression and anxiety doesn’t always lead to these dire consequences, but the data remains unsettling. Flax sees firsthand the elevated pressure kids in Marin County have to succeed and perform. “I’ve been around parents who are so focused on having a winning athlete or a straight-A student that they have a hard time seeing what’s right in front of them,” he says. “Some kids handle that increased pressure with flying colors; for others, it’s a terrifying grind.”

While anxiety surrounding grades and friendships or an unhealthy relationship with social media can all contribute to mental health distress in kids and teens, pressure surrounding sports can also be a serious trigger, especially here in Marin. Steve Glass, who has been teaching and coaching kids in Marin and San Francisco for 30 years and played baseball as a young kid all the way through high school and into the professional leagues, points out that Marin County’s outstanding athletic programs set the bar extremely high in terms the number of schools and club teams in the county that have won major championships in a variety of sports. “But along with those victories comes a sense of ‘at what cost?’” says Glass. “We need to stay mindful of the precedent we’ve already set — and remember that the reason kids get into sports in the first place is to have fun.”

Jake and JT Peterson, who have coached football together at Tamalpais High, led CYO basketball teams and are co-owners of Studio Thirty in Mill Valley and Larkspur, maintain that sports are ultimately about personal growth and can carry lessons well into adulthood, but they also acknowledge that the sports environment is different than when they both played in their youth. “Today’s kids are subject to social media pressures that we didn’t face growing up,” Jake says.

Unfortunately, sometimes it can be hard for parents to recognize the onset of a mental health crisis, says Dr. Michael Enenbach, clinical director at the Child Mind Institute in San Mateo. “Mental health issues such as depression and anxiety can literally appear to come from nowhere,” Enenbach says. “There’s already a lot going on with adolescents, and when they haven’t previously experienced feelings of anxiety or deep sadness before, they often don’t know how to process those feelings or talk about them. No one is immune; both low-profile kids, as well as those kids who seem to have it all, can snap. It’s often why you hear about the captain of the football team or the head cheerleader suddenly making a suicide attempt.”

Being Kind to Your Mind on the Playing Field

Several local coaches, including the Petersons, recognize the stress sports can put on young athletes, and are taking a proactive approach to emphasizing the importance of mental health. “We really work with our athletes to help them shine mentally,” Jake says. “With so many ups and downs in sports, we remind kids to focus on the ‘little wins’ and what they’ve done well — even if it’s just showing up to practice on time, running extra laps or refusing to pay attention to negativity from others. Focusing on what they’ve done right versus ruminating on mistakes makes a big difference.”

Jen Reidy, a Marin-based coach since 2004, also makes mental health a top priority for her teams. When she founded Redwood High School’s field hockey program in 2015, she made mindfulness and mental health a cornerstone element by incorporating regular “Mindful Monday” or “Thoughtful Thursday” sessions into the weekly schedule. She asks each team to create its own mission statement, set individual and team intentions, and bring awareness to thoughts that might hold them back. Sometimes, she’ll send mid-week posts or challenges so the team can stay focused and reinforce learnings. She also ensures her players know they have a safe place with her to discuss anything troubling them, either with the team, or at school or home.

“There are parents who want a specific ‘transaction’ in terms of where they want their child to be in terms of sports performance, but it’s important for us to meet kids where they are,” Reidy says. As part of her consulting business, Winning Mindset with Coach Jen, she runs workshops and gives talks to teams, coaches and parents through her site and Instagram, offering tools, inspiration and strategies to foster a healthy, mindful approach to competitive sports and to build confidence. 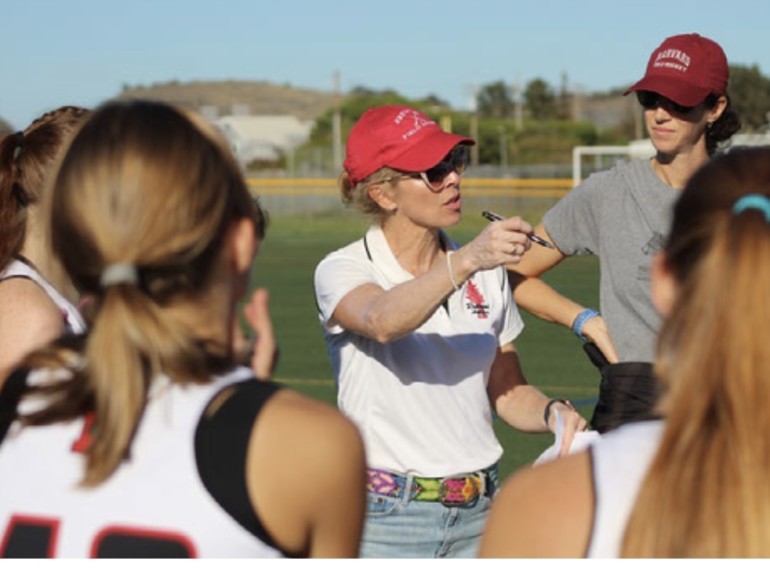 Fortunately, the dialogue surrounding sports and mental health is also beginning to change on the national level. When gymnastics superstar Simone Biles announced she was taking a mental health break from competing in the middle of the Olympic Games in Summer 2021, it was a shock to many. Despite the public pushback, Biles stood her ground and kept her focus on her mental health. Her move was a milestone for many youth mental health advocates, including the Child Mind Institute, which presented her with a Trailblazer Award in November 2021.

Other prominent athletes, including Naomi Osaka, Michael Phelps, Serena Williams and Usain Bolt have stepped forward to openly discuss their mental health challenges and steps they’ve taken to prioritize self-care as much as their physical prowess. A Harvard Business Review article examined how these outspoken athletes are credited with shifting the narrative around mental health and sports.

What remains to be seen is if our own community can follow examples set by these high-achieving individuals. Reidy hopes to inspire other coaches, athletic teams and clubs in Marin to take mental wellness as seriously as she does. “Coaches don’t have to be therapists, but they can be sounding boards for kids and guide conversations around having a positive mindset,” she says. “Imagine the impact on our entire community if all of Marin’s athletic teams normalized these types of conversations and tools and made them more accessible to all?”

Adds Glass, “We all need to keep in mind that sports are ultimately about life lessons. We, as coaches, are not just teaching Xs and Os — we’re teaching kids how to become better human beings.”

Ultimately, Enenbach says, it’s parents’ responsibility to identify potential cues from their children’s behavior that indicate that they may be suffering from anxiety or depression, since kids, especially teens, don’t always talk openly with their parents about what’s troubling them. “Sudden changes in eating or sleeping habits; lack of interest in school, friends or previously loved hobbies and sports; increased tearfulness or irritability — these are all signs to watch,” he says.

If you notice any of these signs, as a first step, have an exploratory discussion. But, Enenbach advises, never start by asking, “What’s wrong?” Instead, use less pointed language, such as “I’ve noticed you seem withdrawn from (sports, school, friends); is there anything you want to talk about?” If a teen does share their feelings, show empathy and use language that communicates your concern, he stresses. “Don’t invalidate them or brush it off,” Enenbach says. “Really try to understand what’s going on.” And, if your concerns are serious, seek professional medical advice or treatment.

Dr. Michael Enenbach of the Child Mind Institute recommends that parents talk to their kids if they notice any of the following signs of mental health distress, and seek professional help if necessary. Resolving to Get Fit This Year? Get Inspired by These Top Bay Area Fitness Influencers Treasuring Childhood at Marin Primary & Middle School – Why It Matters