4 Types of Native Marin Flora to Discover on Your Hike PEOPLE COME TO THIS COUNTY from all over the world to stand in awe under the towering redwoods of Muir Woods, hike the trails along the seashore, and enjoy the views from the Marin Headlands. Many of us have chosen to live here for the same reasons. It’s a place where coyotes still sing at night, deer meander peacefully through woodlands, and red-tailed hawks float on thermals over urban landscapes.

We can credit volcanoes, earthquakes, ocean currents and seasonal winds for giving us a county of great natural diversity. Massive moving plates folded the earth into Mount Tamalpais and Bolinas Ridge, creating a fog barrier and surprising climate variations from west to east. The creation of the Point Reyes peninsula extended the county to the west, adding different soil compositions and further biological complexity. Mountains, cliffs, dunes, and ravines all provided microclimates, each sheltering a unique array of life.

In this bountiful county, there are almost 1,800 species of native plants, including 17 that grow nowhere else. Marin is home to three unique species of jewelflower, tiny plants with stalks bearing delicate purple, cupped blossoms. When walking the trails atop Ring Mountain, you may be lucky enough to spot the endemic and rare Tiburon mariposa lily in bloom. Point Reyes is home to two unique species of native lilac as well as a tiny chocolate-colored checker lily that survives on rocky slopes.

These are not the heroes of Marin’s native plant world, however. That distinction belongs to the plants that anchor its soils, feed its pollinators and wild creatures, and create the landscapes that we all cherish. These plants have had millennia to adapt to the region’s local climate and soils, coevolving with insects, fungi and microbes to form complex networks of relationships that create the foundation of the region’s natural communities. If you look closely, you’ll notice that certain groups of plants tend to appear together wherever the climate, soil and temperature are suitable for them. These familiar groupings create distinctive habitats, each nourishing its own ecosystem of plants, insects and animals. In addition to evergreen forests, some of the predominant habitats in Marin include riparian, oak woodlands, chaparral and grasslands. 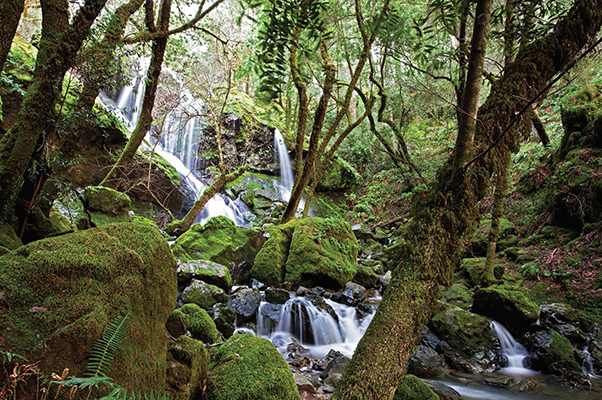 The riparian community that flourishes wherever there are waterways is populated by plants that not only require somewhat regular water, but can survive inundation — some for as much as two months at a time. This habitat is rich with places of refuge and diverse resources for a multitude of visitors, many of which are temporary migrants. Here, willows, rushes and horsetails help anchor the streambed, while ferns, thimbleberry and sedges stabilize the banks and create tangles of vegetation.

A little farther from the stream banks, deciduous valley oaks and buckeyes and evergreen redwoods, bays and madrones help cool the waters in summer and allow more light in winter, both conditions vital to the creek’s life support systems. Natural sloping banks, fallen logs, and dense overhanging vegetation create dappled shade and resting places for salmon and steelhead. A walk along Devil’s Gulch to Stairstep Falls or from Cataract Creek to Cataract Falls will cross waterways where giant elk clover and huge chain ferns dominate the banks, creating the atmosphere of ancient forests. Mount Tam’s Rock Spring Trail leads to a meadow traversed by a stream along which fragrant native azaleas bloom in late spring. Thanks to the mountain, the county is crisscrossed with streams and riparian habitats, yours for the exploring. Most plant communities in Marin contain various species of native oaks, but an open-canopy oak woodland is a very distinctive plant habitat, rich with biodiversity and supporting more species than any other habitat type in the state. Oak woodlands primarily become established at lower elevations and in soils too dry to support a forest. Meadow grasses and wildflowers thrive along with oaks in more open sites. The show begins early in January with fragrant white milkmaids, followed soon by the golden glow of buttercups, until the blues of hound’s tongue and ground iris become predominant. Autumn brings a show of golds and reds as leaves turn color, coffeeberry and toyon bushes hang heavy with fruit, and clouds of creamy cotton-like flower puffs cover the stands of coyote brush.

An oak woodland is alive with life in all seasons. Mule deer browse the understory plants but depend on the acorn harvest for a major component of their fall diet. Acorn woodpeckers create stores of the oak nuts in communal granary trees and excavate nesting cavities that will be repurposed by other residents. As many as four thousand species of insects are associated with oaks, including the California Sister and Mournful Duskywing butterflies. Native bees collect oak pollen, and Anna’s hummingbirds forage for small insects among the growing tips. The best examples of true oak woodlands occur in Novato, with exceptionally beautiful walks along the Bahia Ridge Trail at Rush Creek Open Space Preserve. Here, deciduous blue oaks predominate but mingle with coast live oaks and magnificent large old specimens of common manzanitas with deep red bark and gnarled limbs. At the sunnier edges of the woodland, California sagebrush, sticky monkeyflower and California bee plant may be seen growing together. This same trio is also at home in the chaparral, a plant community prevalent throughout Marin, mostly on south-facing slopes with thin, rocky soils. Chaparral shrubs have evolved to thrive in the resulting nutrient-poor soil where other types of vegetation struggle. Many of the plants are evergreen and have thick, leathery or resinous leaves that enable them to survive the summer drought. Marin’s chaparral habitats are in good shape due to their dense growth on thin soils, two factors that make it hard for nonnative species to get a foothold.

From the chaparral community, we get two of Marin’s most iconic plants: wild lilac and manzanita. In bloom together on the slopes of Mount Tam, one intense royal blue and the other bright pink, they are showstoppers. All this display is not for our benefit, however, but to attract the early pollinators that depend on them for food and that, in turn, ensure the shrubs are pollinated. When the native lupines flower, mounds of purple spears top tall bushes in the Marin Headlands and yellow ones brighten the chaparral on the Point Reyes Seashore. The county’s native lupines are the only host plants for the larvae of the endangered Mission Blue butterfly.

Chaparral shrubs sometimes blend themselves into the edges of grasslands, one of the area’s most threatened habitats. The lack of rain all summer keeps the forest from encroaching; grasslands appear in areas that can’t support trees. Native meadows are often dominated by purple needlegrass, a plant that deserves far more respect than what it has seen through decades of plough blades and trampling cattle. Some clumps of this native bunchgrass are believed to be as much as 100 years old. One particularly beautiful meadow is situated at the top of Deer Island Preserve in Novato where, in good rainfall years, thousands of mariposa lilies create a golden carpet among the grasses, while bulbs of purple Ithuriel’s spear light up the edges of the woodland canopy. When winter rains green up protected meadows on Mount Tam and Mount Burdell, native treasures hidden during the dry season come to life as interwoven species of geophytes, perennials and annual wildflowers burst into a riot of color. The show starts with poppies, creamcups, and blue dicks in spring, then slowly segues to blue-eyed grass, yarrow, lupines and shooting stars, until late summer when soap lilies and tarweeds perfume the warm air. Many locals enjoy hiking during this time to witness a field of wildflowers, alive with pollinators intent on making the most of the floral bounty. At dusk, hawks, coyote and gray fox hunt for dinner, reducing the rodent population while filling their stomachs for the night.

Close to the coast, another type of grassland occurs at Chimney Rock overlooking Drakes Estero, where huge drifts of purple Douglas iris can be spotted. On your walk there, stop and look closely; there are more than 60 species of other wildflowers also growing on that exposed stretch of coast. Many dedicated nature-lovers make an annual trek to the serpentine outcrops on Mount Burdell, where the large, pink, cactus-like flowers of bitterroot almost smother the tiny plants when in bloom. Here also, sharp eyes can spot the purple-flowered stalks of western larkspur among the grasses.

Thanks to the dedicated efforts of a group of far-sighted individuals, 75 percent of Marin County has been preserved as open space. To enjoy these habitats, we need only take one of the many trails throughout the county. So lace up your hiking shoes and head out the door — it’s time to see what beauties you can spot.